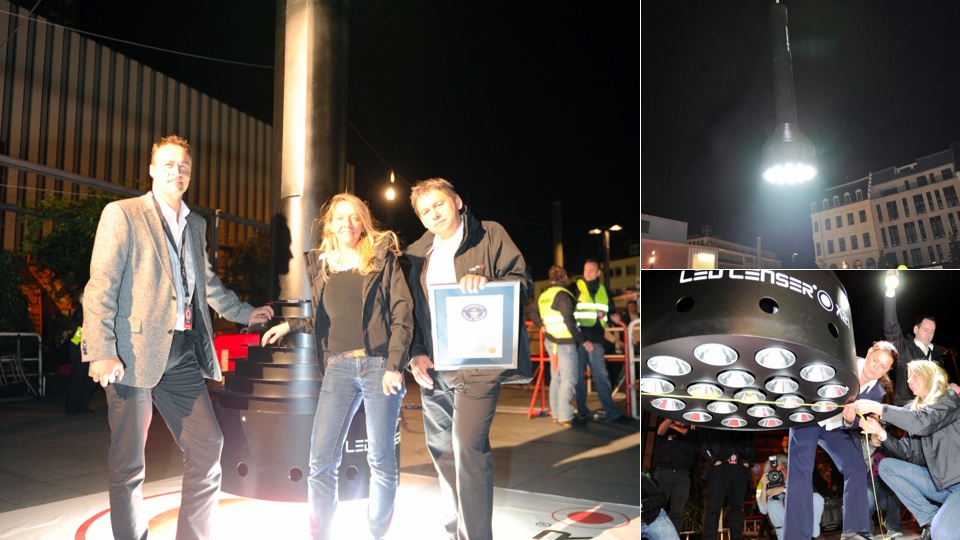 Check out this amazingly compact flashlight! Obviously I am joking! This thing is gigantic!

Made of solid aluminum and stuffed with 19 LED lamps, the LED Lensor’s giganto X21 would probably blind you so hard you’d loop all the way back around with 20/20 vision. Luckily, as you can see above, it was pointed at the ground during the record certification ceremony. Bonus: in case you need to take it with you, it can actually run on its own battery power, and still output 30,000 lumens. [LED Lenser]

Sorry you can’t buy it here but we have some other amazing flashlights in our store!

“The ocean doesn’t care if you’re in the Coast Guard. This kind of thing can happen to anyone.”

Divers Michael Sparks and Samuel Ragsdale heard it, but neither man recognized its significance.

It wasn’t until later that the friends and fellow Coast Guardsmen realized they were in trouble.

“As we approached our anchor, I couldn’t see any line extending to the surface,” said Sparks. “My heart sank. On the end of the anchor chain we found the footlong frayed remains of the only line keeping our boat above us.”

The divers shot to the surface and looked around frantically for the boat. Sparks caught a glimpse of it as it rode to the top of a wave about three miles away. It was the last time he’d see it that night.

“At this point the gravity of our situation really hit me,” said Sparks. “We decided to drop our dive weights because they prevented us from floating properly.”

As nightfall began to set in, weather conditions deteriorated, and the pair began to realize that the survival plan they’d made before heading out to sea was now their only hope of anyone knowing something was wrong—or where to look for them.

“Before we went out on the dive, we told my roommate, James Sellers, where we were going and when we planned to return,” said Ragsdale. “Sparks sent a group text message to some of our Coast Guard friends at Station Fort Macon where we work. His message included the name of the wreck we were diving on, the wreck number, exact coordinates of our dive, and our intention to return by dark.”

As swells began to crash over their heads, the divers were thankful for what they did have with them. Their buoyancy compensators kept them afloat. Their wet suits helped maintain their body temperatures. A safety sausage—a three-foot orange tubular device that could help spot them in the water, along with knives and a high-powered flashlight.

“The adrenaline wore off after awhile,” said Ragsdale. “We both clung to that safety sausage in order to stay together. We tried to figure out where we were and if there was a chance we’d be drifting past a buoy we might be able to cling to.”

“Even with the water temperature at 81 degrees, we were both starting to feel chilly,” said Sparks. “My greatest fear was that we’d end up drifting southeast rather than northeast, which would send us around Cape Lookout into the Atlantic Ocean. This would greatly diminish our chances of being located. We just prayed we’d be found or that we’d wind up drifting onto the beach before the cape.”

Back on shore, Ragsdale’s roommate Sellers did not hesitate to take action once dark set in and the two had not returned. He recognized the potential severity of the situation and contacted Coast Guard Station Fort Macon.

But back on the water, the divers’ optimism began to fade.

“Around midnight, we stopped talking and our hopes of getting rescued before dawn grew faint,” said Sparks. “We were exhausted. Sometime later I saw the running lights of a Coast Guard 47-foot Motor Lifeboat. I pointed my flashlight toward it. After a bit, I saw their blue light begin to flash. I knew they saw me. It turns out we were three miles away, but they saw my light. It took them ten minutes to get to us.”

It was Petty Officer 2nd Class Tyler McGregor’s crew who spotted Sparks’ light in the distance.

“As the coxswain, it’s my responsibility to be as optimistic as possible to keep up the spirit of my crew, but I’d be lying if I said I wasn’t worried,” said McGregor. “The sea was rough, 8-10 foot swells. Searching for two people in the water during the day is the equivalent to searching for two coconuts bobbing in the waves—a near impossible feat in the light that becomes unthinkable in the dark.”

The Coast Guardsmen were pulled from the water after drifting four and a half miles in seven hours.

“As we arrived back at the station I went into the lower compartment of the MLB and saw two body bags down there,” said Sparks. “That really hit me hard. Our friends and coworkers, the same people who’d just rescued us and laughed and joked with us on the way in, had only moments earlier been preparing for the worst-case scenario.”

The following morning, Sparks’ boat was located. It drifted all the way to shore and washed up on a local beach, unscathed.

“The ocean doesn’t care if you’re in the Coast Guard,” said Sparks. “This kind of thing can happen to anyone. I’m going to invest in an EPIRB I can dive with. I’m going to use two anchors and be more cautious with how I anchor in the future. But I’m happy I had that flashlight on me, and that we filed a float plan. Those two factors drastically reduced the search time, and potentially saved our lives.”