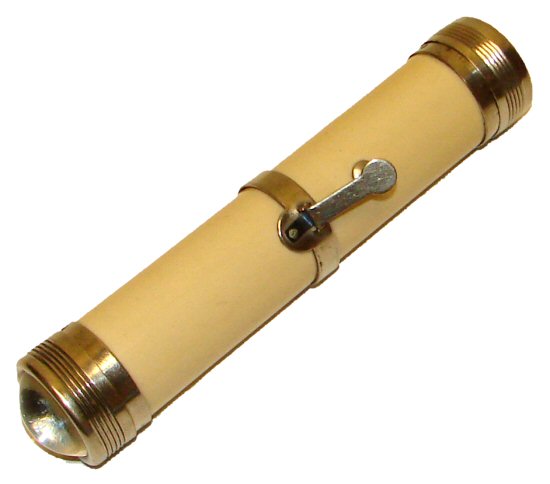 In 1887, the first dry cell battery was invented. Unlike previous batteries, it used a paste electrolyte instead of a liquid. This was the first battery suitable for portable electrical devices, as it did not spill or break easily and worked in any orientation. The first mass-produced dry cell batteries came in 1896, and the invention of portable electric lights soon followed. Portable hand-held electric lights offered advantages in convenience and safety over (combustion) torches, candles and lanterns. The electric lamp was odorless, smokeless, and emitted less heat than combustion-powered lighting. It could be instantly turned on and off, and avoided fire risk.

On January 10, 1899, British inventor David Misell obtained U.S. Patent No. 617,592, assigned to American Electrical Novelty and Manufacturing Company. This “electric device” designed by Misell was powered by “D” batteries laid front to back in a paper tube with the light bulb and a rough brass reflector at the end. The company donated some of these devices to the New York City police, who responded favorably to them.
The angle-head flashlight on the left uses an incandescent bulb, while the adjustable angle-head flashlight on the right uses LEDs to give white, red, blue, and infrared light

Carbon-filament bulbs and fairly crude dry cells made early flashlights an expensive novelty with low sales and low manufacturer interest. Development of the tungsten-filament lamp in 1904, with three times the efficacy of carbon filament types, and improved batteries, made flashlights more useful and popular. The advantage of instant control, and the absence of flame, meant that hand-held electric lights began to replace combustion-based lamps such as the hurricane lantern. By 1922 several types were available; the tubular hand-held variety, a lantern style that could be set down for extended use, pocket-size lamps for close work, and large reflector searchlight-type lamps for lighting distant objects. In 1922 there were an estimated 10 million flashlight users in the United States, with annual sales of renewal batteries and flashlights at $20 million, comparable to sales of many line-operated electrical appliances.[6] Flashlights became very popular in China; by the end of the 1930s, 60 companies made flashlights, some selling for as little as one-third the cost of equivalent imported models. Miniature lamps developed for flashlight and automotive uses became an important sector of the incandescent lamp manufacturing business. 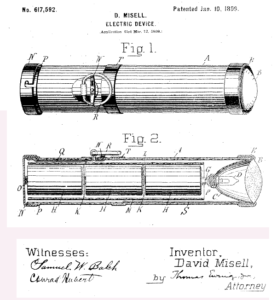 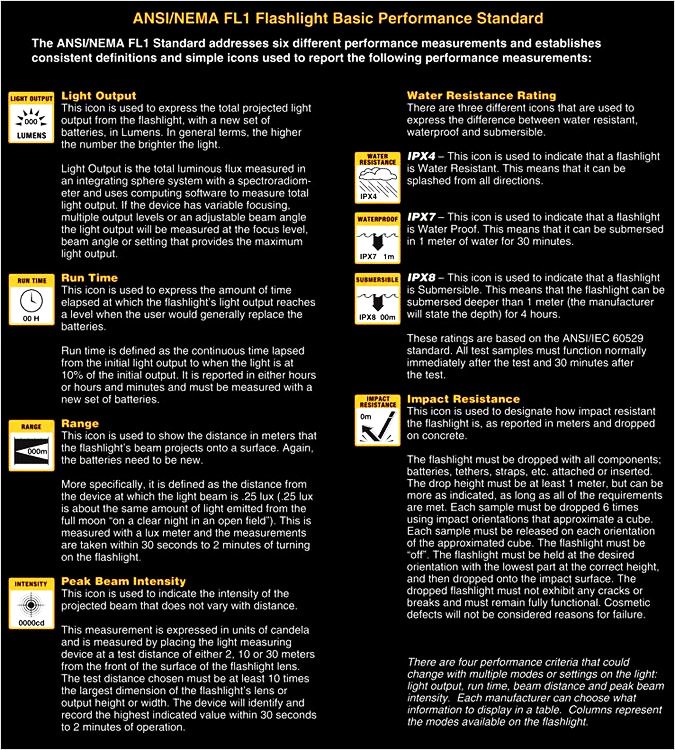 Pay attention to Flashlight performance Standards when you buy a flashlight top be sure you are getting the flashlight you need.

The United States Army former standard MIL-F-3747E described the performance standard for plastic flashlights using two or three D cell dry batteries, in either straight or angle form, and in standard, explosion-proof, heat-resistant, traffic direction, and inspection types. The standard described only incandescent lamp flashlights and was withdrawn in 1996.

In the United States, ANSI in 2009 published FL1 Flashlight basic performance standard. This voluntary standard defines test procedures and conditions for total light output, beam intensity, working distance, impact and water resistance, and battery running time to 10% of initial light output. The FL1 standard gives definitions for terms used in marketing flashlights, with the intention of allowing the consumer to compare products tested to the standard.[19] The standard recommends particular graphic symbols and wording for the product package, so that the consumer can identify products tested to the standard. Testing may be carried out by the manufacturer itself or by a third-party test laboratory.

The FL1 standard requires measurements reported on the packaging to be made with the type of batteries packaged with the flashlight, or with an identified type of battery. Initial light output is measured with an integrating sphere photometer, 30 seconds after the light is switched on with fresh (or newly charged) batteries. The total light emitted is reported in lumens. Luminous intensity is determined by measuring the brightest spot in the beam produced by the flashlight, in candelas. Since this is a measure of all the light emitted in a solid angle (the “cone” of light in a particular direction), the beam intensity is independent of distance.

The working distance is defined as the distance at which the maximum light falling on a surface (illuminance) would fall to 0.25 lux. This is comparable to a full moon on a clear night. The distance is calculated from the square root of (the beam intensity in candelas divided by 0.25 lux); for example, a beam intensity of 1000 candelas produces a working range rating of the square root of (1000/0.25), or 63 meters. The result is reported in meters or feet. The working distance is from the point of view of the user of the flashlight. A light directly pointed at an observer may be visible against a dark background for many times this distance, especially if the observer has night-vision equipment.

Run time is measured using the supplied or specified batteries and letting the light run until the intensity of the beam has dropped to 10% of the value 30 seconds after switching on. The standard does not evaluate the behavior of the flashlight output during run time. A regulated flashlight may run at only a slowly declining output and then abruptly cut off, but unregulated types may have steeply-declining light output after only a short time. Manufacturers of headlamps may use a different standard which rates run times until light output falls to 1 lux at 2 meters distance; this value is not comparable to the FL 1 runtime measurement.

Impact resistance is measured by dropping the flashlight in six different orientations and observing that it still functions and has no large cracks or breaks in it; the height used in the test is reported. Water resistance, if specified, is evaluated after impact testing; no water is to be visible inside the unit and it must remain functional. Ratings are given in IP Code terms, where jet spray corresponds to IP X6, brief immersion to IPX7, 30 minutes immersion at 1 meter or more is IP X8; (the depth is reported if greater than 1 meter). An IP X8 rating by FL1 does not imply that the lamp is suitable for use as a diver’s light since the test protocol examines function of the light only after immersion, not during immersion.[20]

The consumer must decide how well the ANSI test conditions match their requirements, but all manufacturers testing to the FL1 standard can be compared on a uniform basis. The light measurements are more directly related to the use of flashlights than is the nominal power input to the lamp (watts), since different LED and incandescent lamp types vary widely in the amount of light produced per watt. Even the same LED or lamp in different optical systems will show different beam characteristics. The visibility of objects depends on many factors as well as the amount of light emitted by the flashlight.

ANSI standard FL1 does not specify measurements of the beam width angle but the candela intensity and total lumen ratings can be used by the consumer to assess the beam characteristics. Where two flashlights have similar total light (lumen) measures, the unit with the higher candela rating produces a more concentrated beam of light, suitable for lighting distant objects; it will also have a higher working distance. If two lights have similar candela ratings, the light with higher lumen value will produce a wider beam and will light a wider area overall. A beam width (containing most of the power of the beam, or “hot spot”) of a few degrees corresponds to a spot light, useful for searching for distant objects; beam widths of 20 degrees or more are described as flood lights, suitable for lighting a wide nearby area. Typically even a flashlight beam with a small hot spot will have some light visible as “spill” around the spot.