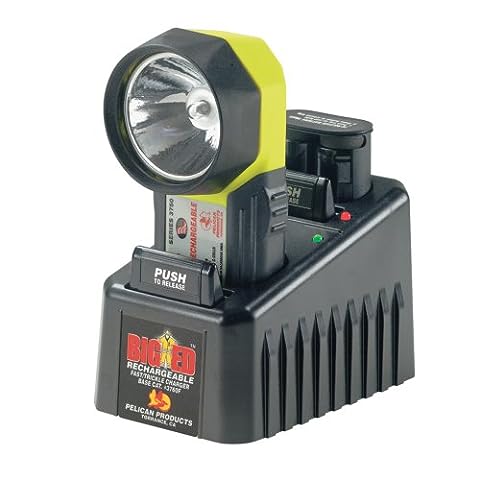 Product prices and availability are accurate as of the date/time indicated and are subject to change. Any price and availability information displayed on [relevant Amazon Site(s), as applicable] at the time of purchase will apply to the purchase of this product.

The rechargeable version of the 3700 with mutliple options for charging. The Fast Charger System comes with a 2-bay charger base: a fast charging bay for the Big Ed (with battery pack installed) and a trickle bay for a spare battery pack. It also comes with a 110V transformer. The Trickle Charger System comes with a trickle/trickle charger base. It is available with either a 110V transformer or 12V plug-in adapter (for vehicle installation). Another option for vehicle installation for the Trickle system is with a direct wiring kit accessory.

Designed for firefighters and equipped with a backup krypton emergency lamp housed behind the reflector, this rechargeable right-angle flashlight projects an intensely bright xenon-lamp beam straight ahead while the flashlight, in hands-free mode, hangs from pocket or belt on a heavy-duty stainless-steel clip. The beam cuts through thick smoke and dust, making it also ideal for emergency and utility workers. Made of rugged ABS resin that resists chemicals, corrosion, and extreme temperatures, the flashlight has rubber side grips to prevent slipping. A push-button switch on the side is easy to operate, even when thick gloves are worn. The flashlight is seven inches long and weighs 20.48 ounces with rechargeable battery pack installed.

About Pelican Products
Dave Parker, president of Pelican Products, has been an avid scuba diver since age 11. During his early diving years, he repeatedly discovered that something he needed to make a dive complete was simply not available. It dawned on him that if he needed that piece of gear other divers did, too. In 1976, he began the company with his wife and co-founder Arline, an airline stewardess, while he continued his advertising and industrial-design business. From that inception as a small garage operation, Pelican has blossomed into an international marketing and manufacturing firm.

There are no reviews yet.