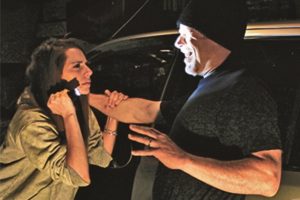 Read the following article and below you will find our choice for a flashlight for defense! 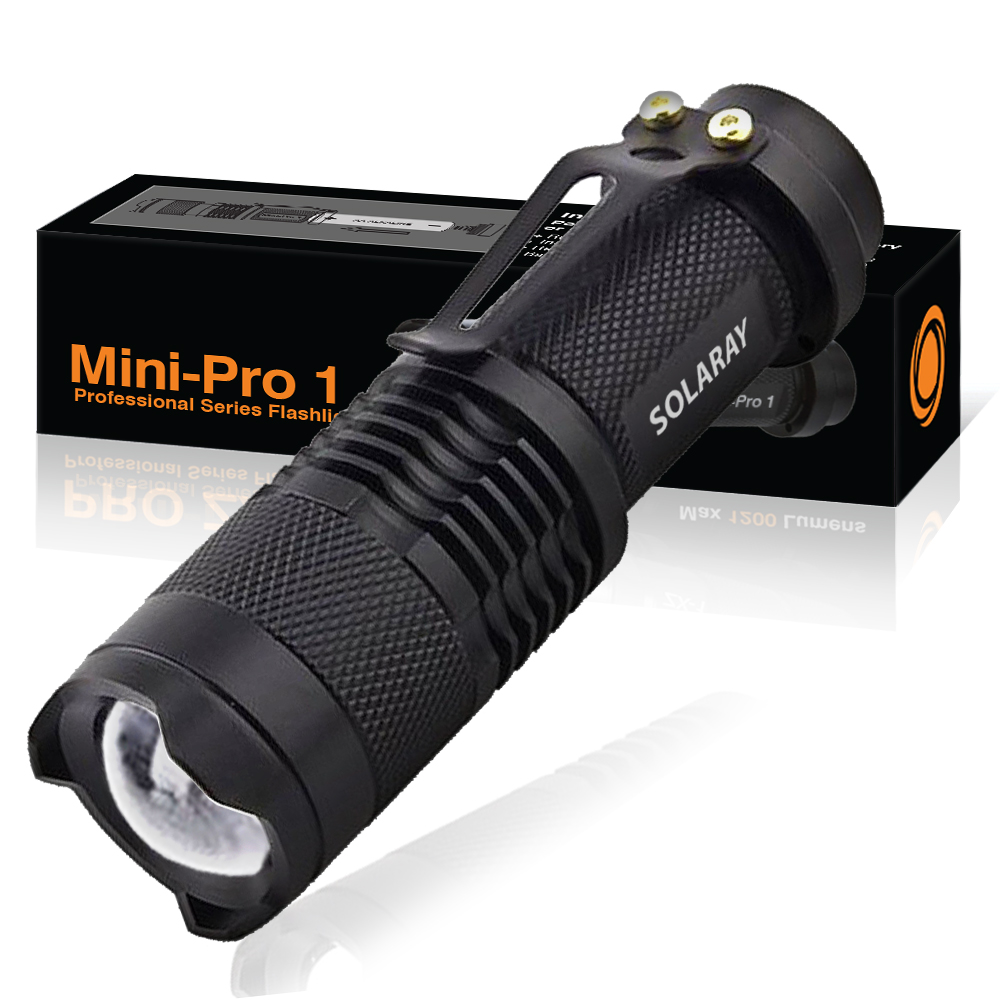 Choosing the Best Flashlight for Self-Defense
By Alex Manire

Many of my self-defense students have questions about flashlights. As with most categories of equipment that fall within the tactical or self-defense genre, there are simply too many options to truly capture the whole topic with a short article. What I would like to do, however, is hit some of the more general topics that are not common knowledge for most people. This article does not cover every possibility or situation; I’m only trying to give enough general knowledge to enable someone who has no experience of any kind to feel like they can begin looking for the right light.

Let’s start with a brief sum-up of why flashlights make such wonderful tools. Most people think of a tactical flashlight and immediately think of the big MagLite that can be used to knock out a Yeti. I would like to point out that in the event someone is attacking me, I’ll be all too happy to hit them with just about anything I can get my hands on. While a large MagLite is an option, a good flashlight can be used much more effectively, and it won’t have to be something that you need a backpack to carry. A good flashlight can be used to control, disorient, and confuse an attacker in low to normal light situations. So, indeed, it is the light part of flashlight that is the key to making it a wonderful tool.

When shopping for a flashlight, you will find two main types of lighting methods – incandescent and LED. Incandescent is the light that most people are used to seeing. It consists of a single filament light bulb that sticks through the head of the light at the base of the lens housing. The bulb is protected by a plastic or glass cover. These flashlights can, in fact, burn quite brightly; but remember that in a way they are burning. They produce a lot of heat and can be a little fragile; their filaments may not take much abuse. These lights will flood an area with light that’s almost yellowish in color. The beam usually can be focused or unfocused to achieve the desired light ring. The versatility of the size of beam is a good feature, but the user needs to know how to quickly change the focus for a given situation. There are exceptions to every rule, but generally speaking, simple, incandescent lights will cost a little less to purchase.

Light-Emitting Diode (LED) flashlights are the other readily available type. The engineering of the light is beyond the scope of this article, but you do need to know how to compare the two lights. If incandescent light could be compared to a normal 60W light bulb, an LED would be compared to the light emitted by the screen on your iPhone. Therefore, there are usually multiple LEDs in the head of the flashlight. LED flashlights give off light that has a slight bluish tinge. Because there are more individual light sources, the light emitted is usually a little more evenly distributed throughout the beam, and very little heat is produced while these lights are on. Another big bonus is that they are a little harder to break with a bump, hit, or shock of some kind. For this reason, you’ll find that a great many weapon mounted lights are LED since they handle the shock of the firearm discharging rather well.

A final technical consideration for a flashlight is its lumen level. Lumens are the measure for how bright a light appears. For the most part, the 50- 80 lumens range is perfect to see things in the dark. But for self-defense, I usually prefer the 150-180 lumens range, possibly even more.

When picking a flashlight, several key questions should be considered. If you address these questions while researching your light, you’ll end up with one that’s better suited to your personal needs and likes.

The first question you should consider is the size of the flashlight. Will the flashlight be able to be worn or carried easily without getting in the way of my normal routine? For this reason alone, I tend to not carry the biggest flashlight I can find. There are plenty of pocket-sized lights that are powerful.

The next question is about getting your hands on the flashlight. Will I be able to access it quickly and in the dark without needing to look for it? This might seem like common-sense, but I’ve seen it overlooked many times.

Another question has to do with function. Does the light have a good track record of being used in the situations I’m planning to need it for? I wouldn’t want to take a two dollar key chain flashlight with me in a very dark forest with a lot of obstacles. There’s just not enough power to the light to show me the things I need to see, and there’s almost no range to them.

Range is another very important consideration. How far I can see with my light is not the same as the distance my light can be seen by someone else. I need to consider the target I make when I turn on my flashlight as much as I need to consider my need to see around me. Again, training and practice are the best ways to compensate for these situations. There are methods that can help reduce risk while using a light in a dangerous situation, but you need to learn these techniques from an experienced instructor.

If I need the light to produce a large amount of light, will it be enough to stun or blind someone for an instant? Again, I look for the capability to hit that 150 or higher lumens range, but I also try to pick one that doesn’t ALWAYS operate in that range because sometimes I just need a flashlight.

Does the flashlight have the ability to be turned on and off VERY quickly? I tend to lean toward pressure buttons here; if I’m adding pressure it’s on, and if not, it’s off – pretty simple.

Does it have the ability to remain on at the level of light I need? Again, sometimes I need a flashlight to just be a flashlight. If my pressure button doesn’t also have a way to turn the light on and leave it on, then I tend not to use it.

Will the light function as a light? More to the point, will this tool actually prove useful when I need it? Will I be able to adjust the beam, the brightness, and the features quickly and appropriately for a given situation. One of my friends told me of a time when he was a young police officer. He chased an assailant up a tree, and with five other officers there, he pulled out his new flashlight that simply drowned out all the other lights around him. He told me that he learned “that the man with the brightest light is apparently the one in charge.”

Does the light have other ‘special’ features? There are some lights that have little beveled edges around one end or another. These can easily be used for self-defense. I think it’s worth mentioning them, but I usually tend to use a flashlight as a flashlight. If I have to hit someone, I’ll find something harder and more clumsy; rocks or chairs work great. However, when there’s nothing else available, it’s nice to know I have the option if needed. Lasers can also be found on some lights, but lights with this option usually are made to be mounted on a firearm. Since many who carry a flashlight will not be carrying a firearm, and weapon mounted lights are a special topic, it is beyond the intended scope of this article to consider laser options.

Is the flashlight simple enough to actually use without activating a ‘special’ option by accident? Some lights have strobe options that are disorienting to attackers, but strobing light can also cause the same disorientation in the user. I distinctly remember trying to do a low-light pistol course, and my strobe option kept turning on when I was trying to make my shot. Strobes are great for signaling or disorienting someone, but when I’m trying to make a shot with my pistol, it tends to disorient me instead.

With flashlights, as with any other item that has a high failure rate, if you carry one… carry two. For items that can fail you, it’s always a good idea to have a back-up. I actually carry two flashlights on me, or I have one nearby that will be easily accessible perhaps in my vehicle or in an outside pocket of my pack that I can quickly find.

Some people want to know what flashlight I prefer. I tend to like lights that are LED, have a thumb pressure control switch with the ability to leave the light on somehow if I choose, and have at least two settings – one around 50 lumens and the other around 180 lumens. I would rather spend a little more money on exactly what I want, knowing it’ll be around for a long time, rather than just get something inexpensive that I might have to replace too soon. Many manufacturers offer a wide variety of lights. I suggest that, as you research and choose a light that meets your needs, you also ask whether others who have similar needs and requirements choose the brand that you are considering.

As with almost every piece of equipment that’s out there, always keep in mind that the more time and thought you put into it, the better choice you’ll make. Most important of all is once you have your light, practice with it the way you’re going to have to use it when the time comes. Low light training classes are an entire course by themselves at nearly every self-defense style training school in the world. Training and practice are the essential keys to having self-confidence in potentially dangerous situations whether it is the use of flashlights or any other tool or weapon.

Alex spent over ten years in the US Army. Deployed on many occasions to combat zones in regions like the Balkans and the Middle-East Alex Manire quickly earned the respect of the units he served with and ended his career proudly training Soldiers in advanced shooting and tactics. He continues to train with many of the best agencies around the country, holds multiple certifications from schools like the Sig-Sauer, Academy, Ranger’s Range, and CRI Counter Terrorism Training, and still continues to teach as a Firearms, Tactical, and Self-Defense Instructor today.

Still here and looking for a great defense flashlight? Our choice is the SOLARAY Handheld LED Tactical Flashlight, Professional Series ZX-1 Kit! Do yourself a favor and follow the link below to check it out. It is an outstanding Tactical Defense Flashlight.